2020 Toyota Highlander | Everything we know so far One of the original and most popular three-row family crossovers has been completely redesigned, and if you liked the previous version, chances are you’ll like the incrementally improved 2020 Toyota Highlander. It’s well-equipped with generous safety equipment and entertainment features, and is available with the best fuel economy by far thanks to its unique hybrid offering. That said, it is smaller than virtually all of its competitors, so if you plan to frequently use all three rows of seats and/or need lots of luggage space, it may not be for you.

We have yet to drive the 2020 Highlander, but will update this post when we do. In the meantime, you can find everything we know so far about it below.

The Toyota Highlander is all new for 2020, riding on the same new platform that underpins other recently redesigned Toyotas. It’s only a bit bigger than before, and largely represents evolutionary changes intended to bolster its refinement and sharpen its driving experience. The previous Highlander’s V6 engine is now standard (the weakling four-cylinder has been dropped), while the Highlander Hybrid model is more powerful, more efficient and now available with front-wheel drive. The advanced torque-vectoring all-wheel drive system from the RAV4 Adventure is now an option on some V6 trim levels. Finally, styling inside and out is significantly different and infotainment features have been bolstered with standard Apple CarPlay and Android Auto. A jumbo 12.3-inch touchscreen is also now available. 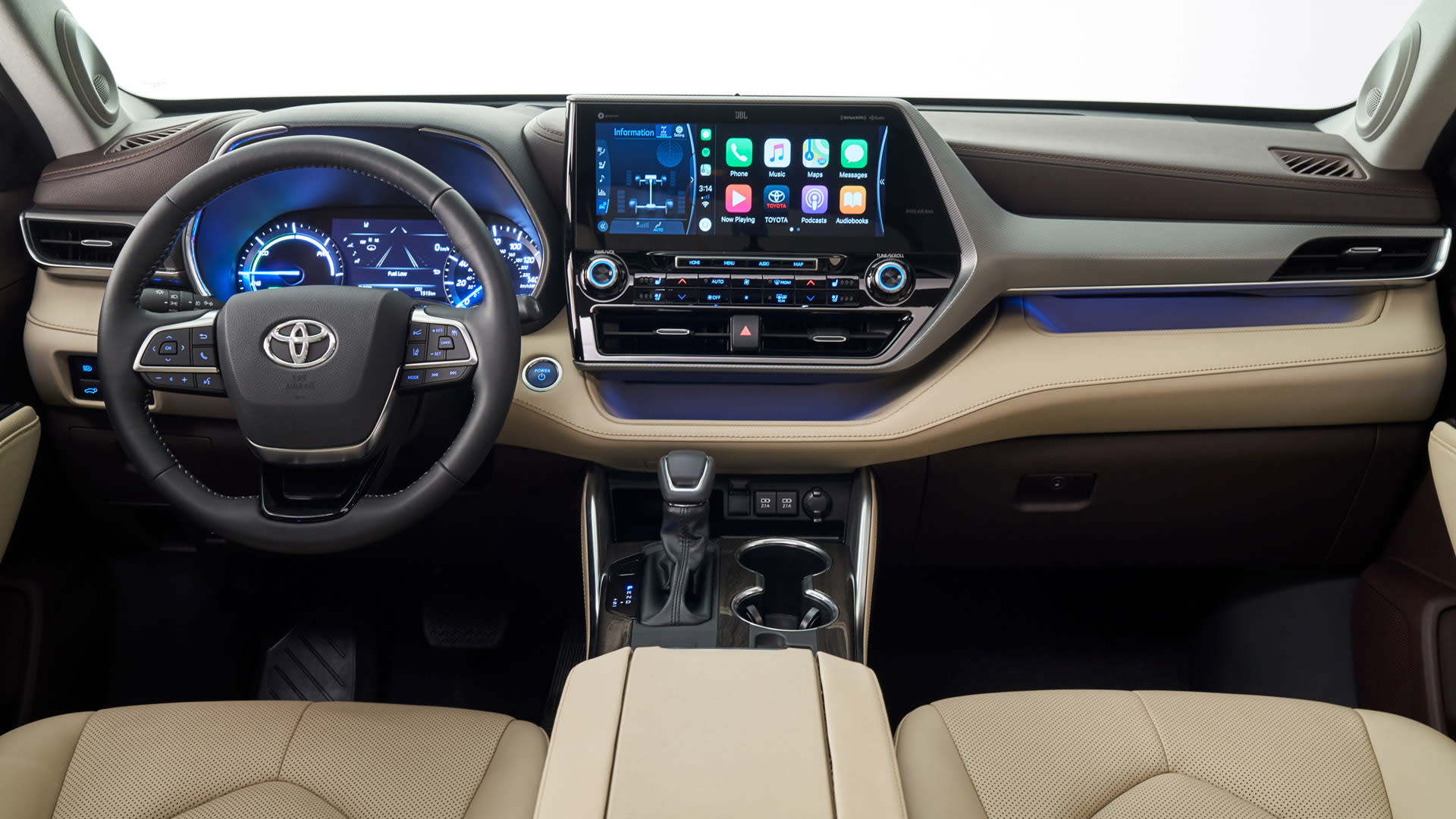 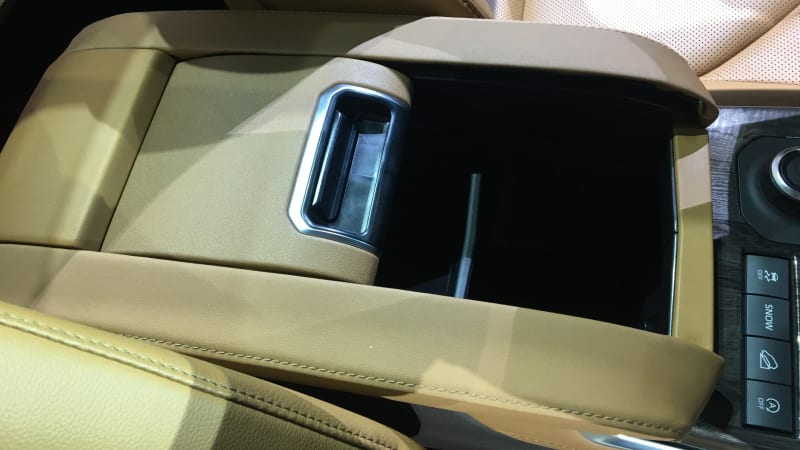 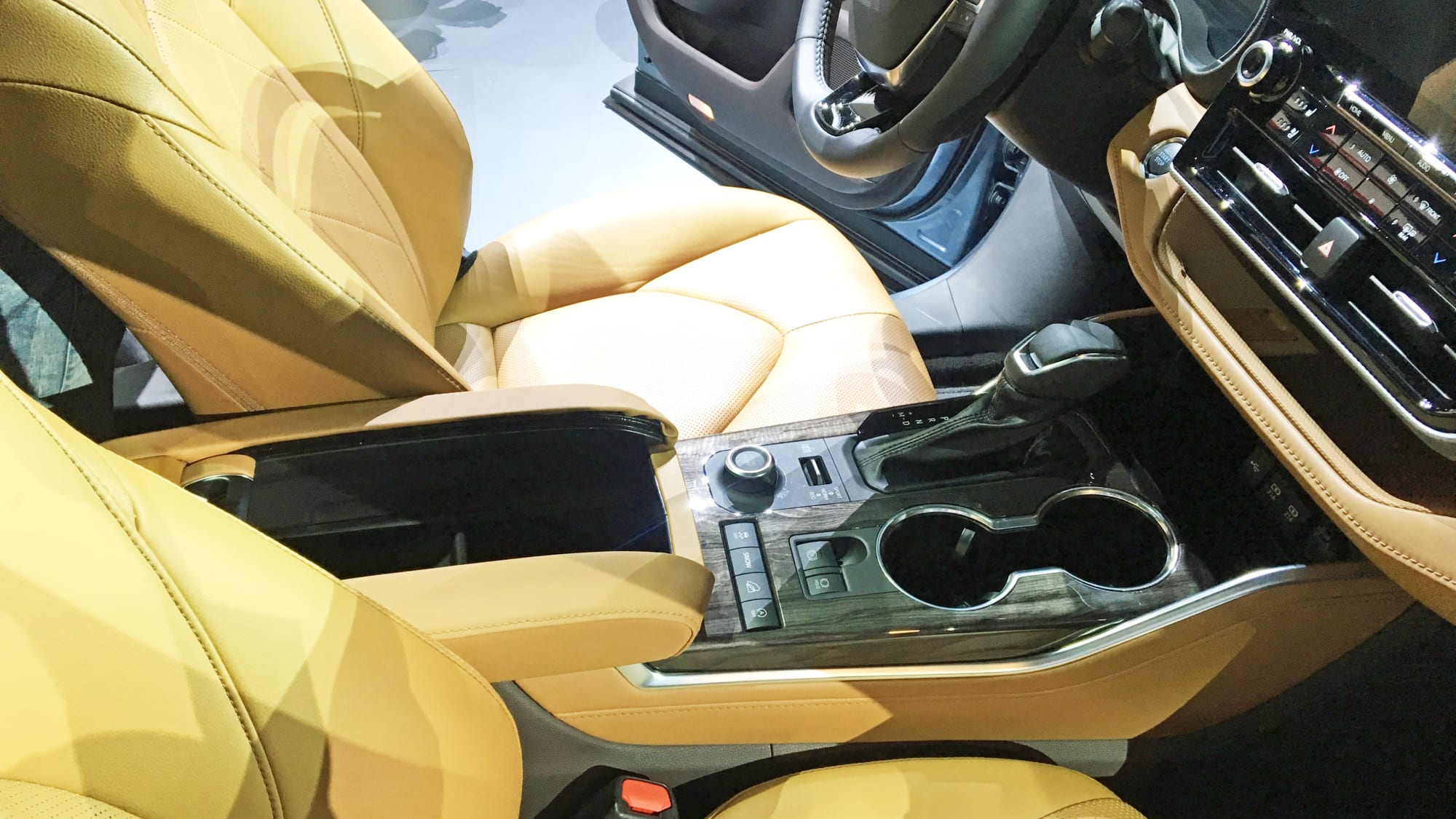 The 2020 Highlander interior largely maintains the functionality of its predecessor, but makes it more visually distinctive. Materials quality has also been improved, with more stitched simulated leather surfaces, but to be fair we’ve only seen the range-topping Platinum trim at this point.

Interior storage remains a priority for Highlander. It retains the mid-dash shelf of its predecessor, but it’s now split in two (one beneath the center stack controls, the other in front of the passenger), and there’s a squishier, grippier surface inside to keep items secure. Below, there’s a larger area specifically devoted to even the biggest smartphones. It is there where all three front USB ports reside, while those in the rear are on the back side of the center console (there are none in the third row). That center console’s bin is once again very deep and covered by a sliding cover ­­— but there’s only one cover now instead of the old model’s odd clamshell design, and it’s more densely padded to better serve as an armrest.

In terms of technology, every 2020 Highlander comes standard with Apple CarPlay, Android Auto, Amazon Alexa integration, Waze app control, satellite radio and in-car WiFi. All trim levels but the top Platinum also come standard with an eight-inch touchscreen, which is currently the optional screen size on most Toyotas. It’s also mounted quite high on the dash, making it easy to see (and effectively larger, like sitting closer to your TV). The Platinum has a 12.3-inch screen, which is a Toyota first. Like other extra-wide screens, such as the one in the Kia Telluride, it allows for a 60/40 information split. You can simultaneously look at hybrid information and the Apple CarPlay interface, for instance, which eliminates the need to constantly go between screens. 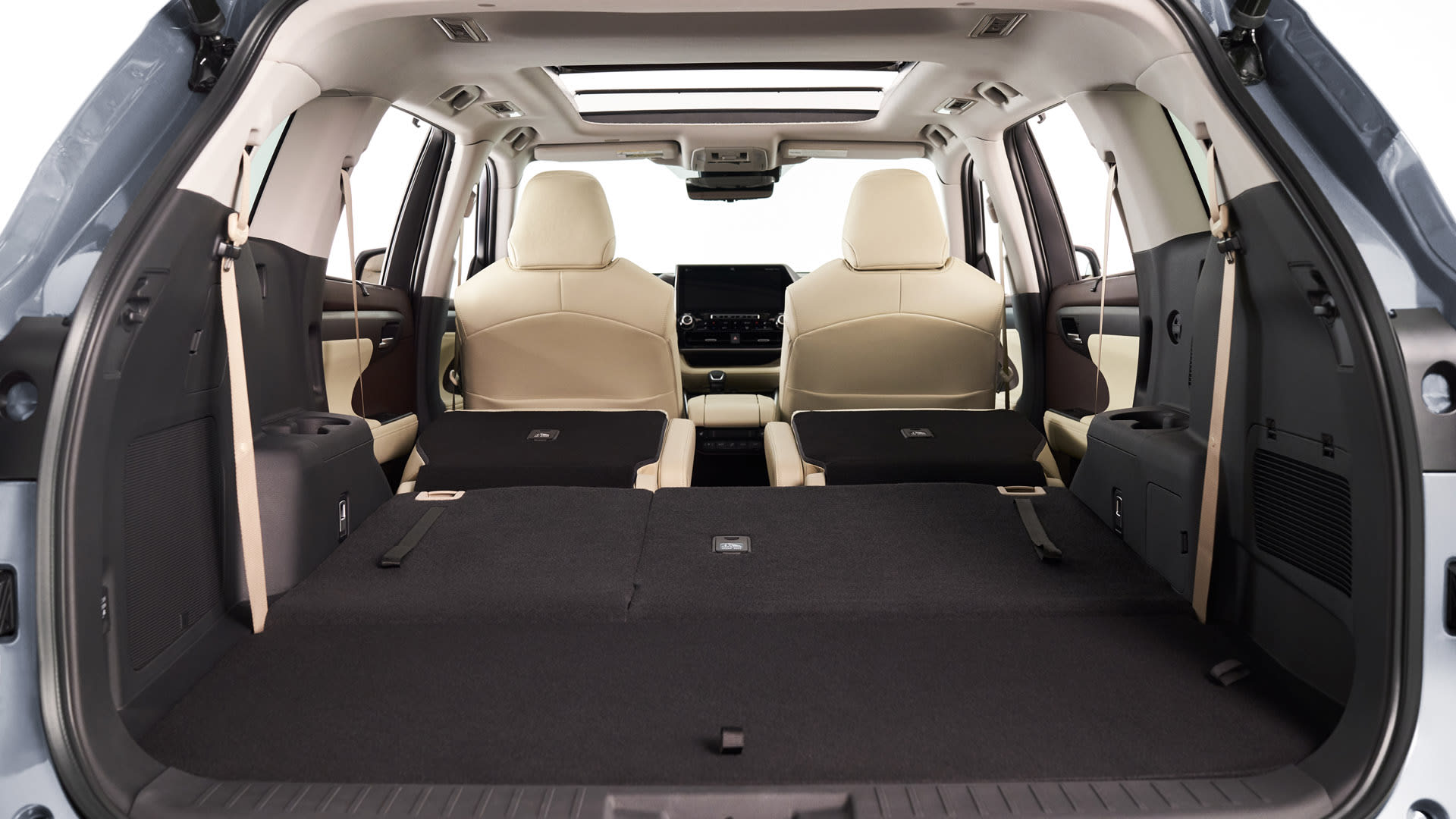 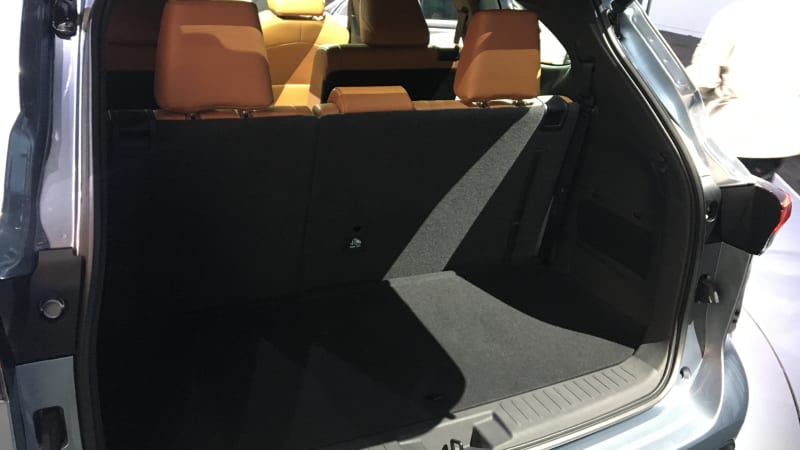 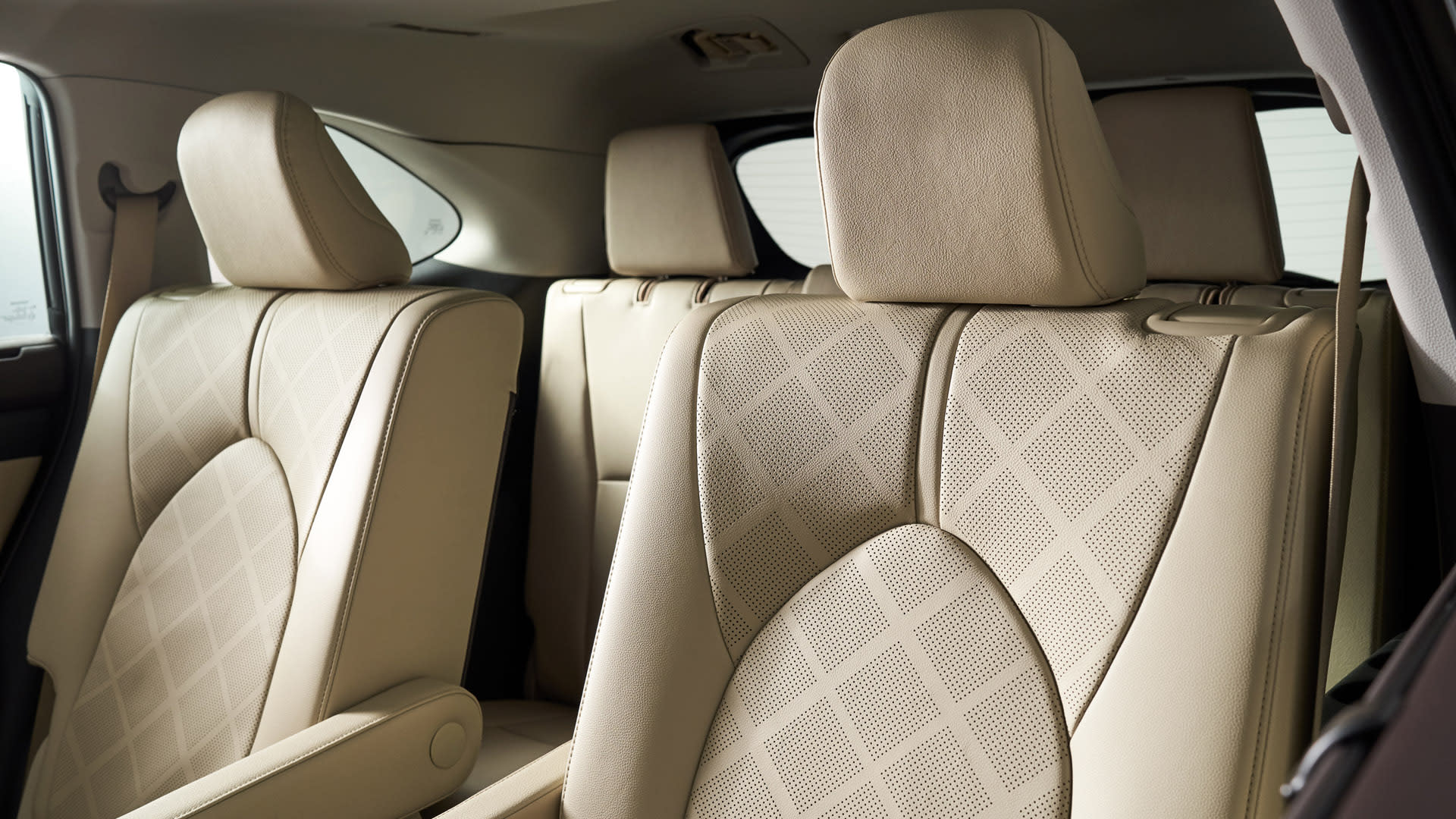 How big is Highlander?

If you’re shopping within the Toyota family, the Highlander offers appreciably more space than the RAV4, both in terms of cargo capacity and its extra row of seats. It also has a deeper, more accessible space than what’s in the 4Runner.

That said, the Highlander is one of the smallest three-row crossovers available. Apart from the Kia Sorento and maybe the Mazda CX-9, you’re going to find more cargo capacity and passenger space in the Highlander’s competitors. That’s especially true in the third row. The second row slides a bit more to grant extra legroom now, but the third row remains awfully close to the floor, and it won’t be long before your growing kids will feel cramped and claustrophobic in the way-back. Full-size teens and adults will be flat-out grumpy.

That said, the Highlander’s smaller size might be just right for many buyers who appreciate its more manageable dimensions when parking or maneuvering in tight spots. Plus, if you only need that third row for occasional use and just a little more space than what a RAV4 provides, it really won’t matter that the Highlander can’t match its competitors’ jumbo size. What’s Highlander’s performance and fuel economy?
There are two powertrain available for the 2020 Toyota Highlander. The standard, gas-only engine is a 3.5-liter V6 that produces 295 horsepower and 263 pound-feet of torque. That’s one of the greatest standard outputs in the segment, bettered only by the 2020 Ford Explorer and Chevrolet Traverse. Full EPA fuel economy estimates have not been announced, but Toyota says it expects an estimate of 22 mpg combined for front-wheel-drive models.

An eight-speed automatic is standard, but like the new RAV4, there are two available all-wheel drive systems. The base one available on L, LE and XLE is a typical reactive system that operates in front-wheel drive until slippage is detected, in which case, power is sent to the rear axle. The Limited and Platinum get the new Dynamic Torque Vectoring all-wheel drive. It’s a predictive system that draws data from multiple vehicle controls to determine whether power is needed at the rear. It can also send different amounts of power between the left and right rear wheels, hence the torque vectoring bit in its name, to aid dry road handling as well as wet weather traction. There’s also its Rear Driveline Disconnect system that disengages the prop shaft in certain cruising situations to save fuel. That’s also accomplished with a new standard automatic stop/start system fitted to all 2020 Highlanders.

The 2020 Toyota Highlander Hybrid features a 2.5-liter four-cylinder that teams with a pair of electric motors to generate electricity and power the front wheels. All-wheel-drive Highlander Hybrids gain a third motor at the rear axle. Total system output is 240 horsepower (same as the Avalon and more than the RAV4), while Toyota estimates it will achieve 33-34 mpg combined. That’s up from 28 mpg combined previously, and far-and-away the best fuel economy in the segment. You could save hundreds of dollars every year on gas by going with the hybrid, but you’d obviously be sacrificing quite a bit of power in the process.

What more can I read about the 2020 Toyota Highlander?

5 questions answered about the 2020 Toyota Highlander

The Highlander’s chief engineer answers our questions about its size, how it’s different from the RAV4, and why there isn’t an Adventure trim level.

We review all the changes for the 2020 Highlander, comparing it to its predecessor’s dimensions, specs and interior design. We also provide more in-depth information about its engineering and new features. What features are available and what’s the Highlander’s price?

We expect pricing for the 2020 Highlander to be announced closer to its on-sale date in December 2019, with the Hybrid arriving in February 2020. Specifically, it should correspond with our first test drive opportunity, likely in November.

The LE additions include a power liftgate, blind-spot warning, LED foglamps, and a leather-wrapped steering wheel.

The 2020 Highlander Hybrid is offered in all the above trim levels except the L.

Every 2020 Highlander comes standard with forward collision warning with pedestrian detection and automatic emergency braking, lane-keeping assist, lane-tracing assist, road sign identification and alert, and automatic high beams. Blind-spot and rear cross-traffic warning are standard on all but the base trim level.