The Toyota Avalon has always been a little…divisive. Hard to believe considering its relatively pedestrian full-size sedan m.o., but for some reason it seems many were never sure where it fit in the line-up; I’ve heard it described as “a couch with wheels” at best, and “somewhat unnecessary” at worst. The Camry, which isn’t that much smaller than the Avalon, outsells it in droves to the tune of about three-to-one in Canada, to the point where it can be tough to see where the Avalon fits. Then you consider the Lexus side of the ledger and especially the ES, which now shares a platform with the Avalon and can be had for similar money, and the waters get muddied further still.

Then, however, the 2018 Detroit Auto Show came and with it, the debut of the all-new Avalon and I have to tell you – it piqued this (admittedly, somewhat cynical at times) journo’s interest.

All crazy headlamp lenses, grille and big wheels, this latest Avalon is much sleeker, much more purposeful in its stance than previous. That’s on the surface; look deeper – well, look inside, anyway – and you’ll see the latest version of Toyota’s Entune infotainment and the existence of Apple CarPlay which, when the Avalon debuted and for some time after it, made it the only Toyota/Lexus product to have the tech. Tech, it should be said, that was making its rounds through pretty much the entirety of the industry at the time. Looks good, too, all flat and floaty and modern. At first, I thought reaching the touchscreen was going to be a problem since it appears so far away but I took no issue with it as it’s slightly canted towards the driver. It may have a floating effect, but the centre console is quite large overall and I have a feeling that some drivers – especially shorter drivers that have to sit closer to it – may find it a little…imposing, a little looming.

I’m also a fan of the climate controls; they’re traditional buttons, yes, but they’re set against a surface which looks like it could be a touchscreen and if there’s one thing most will agree with, it’s that flat touchscreens reduce clutter and look good, even if they can be a little frustrating in their response time and so forth. With the Avalon, you’re kind of getting the best of both worlds, which is nice. They do well to mimic the infotainment system, which gets a set of buttons either side of the screen to call its own. 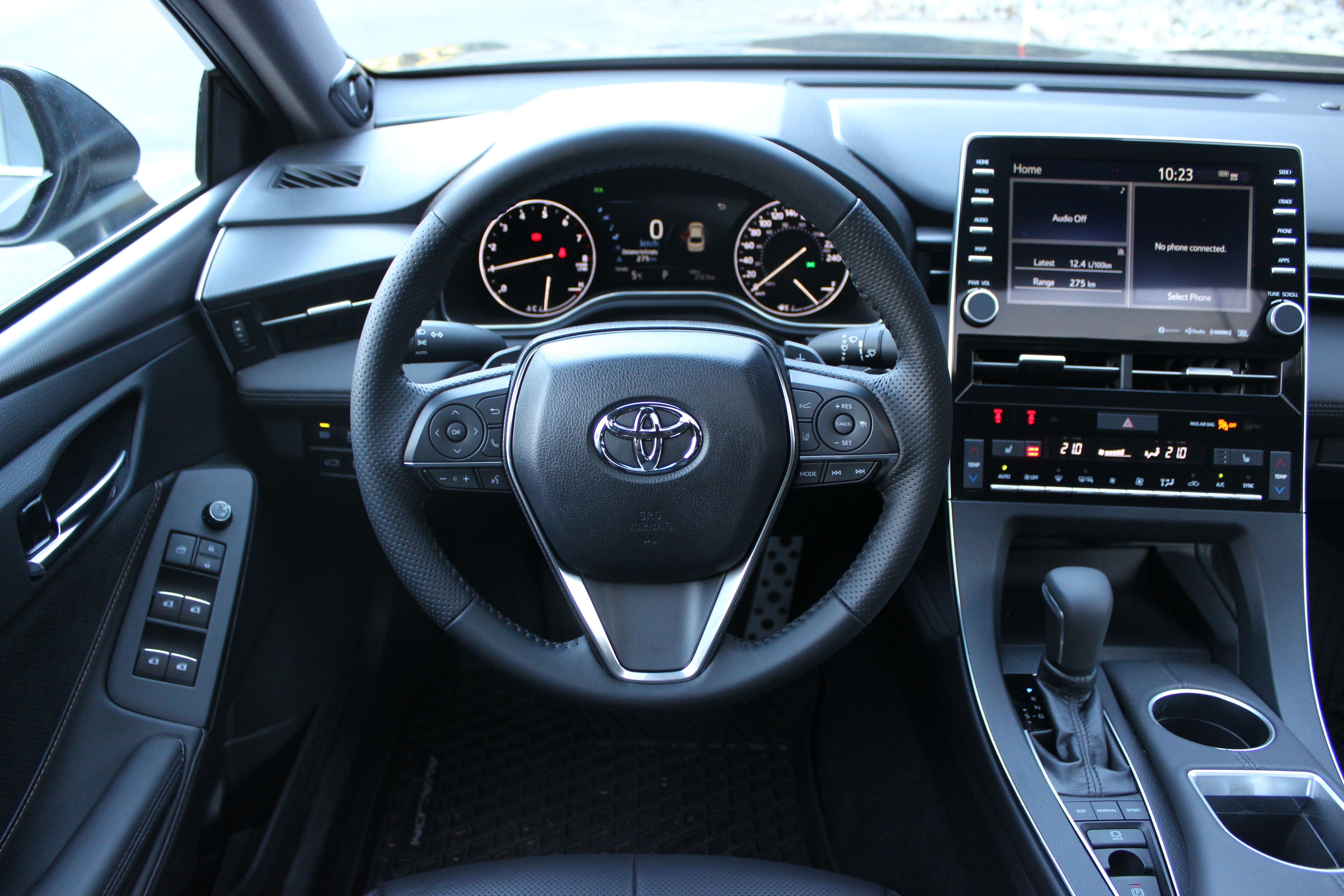 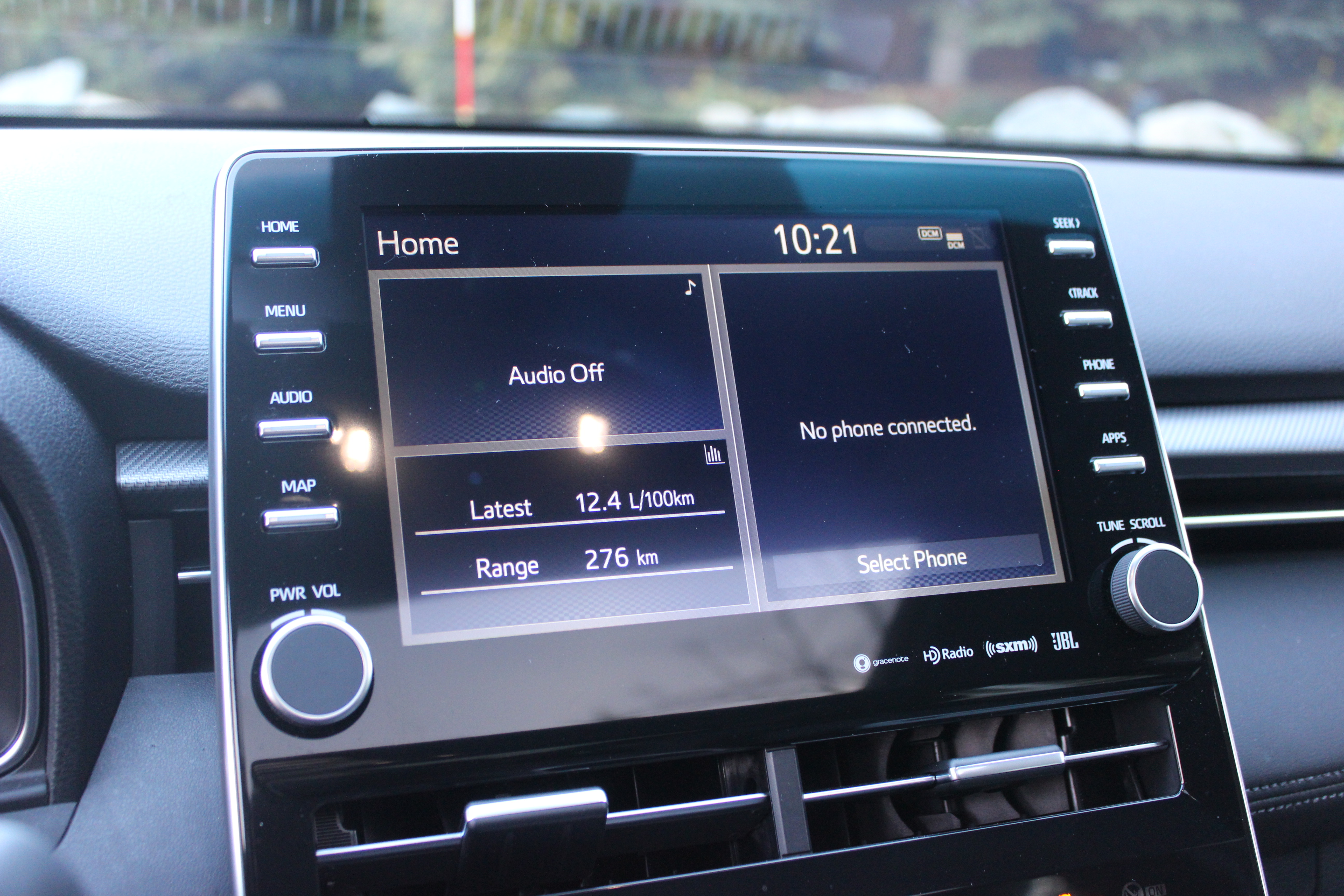 As far as the actual Entune interface goes: bit of a mixed bag, really. The graphics are OK; many will appreciate the large fonts but others – myself included – find it a little old school looking and somewhat low-res as a result. I do like how we have proper volume and tune knobs, however – a bigger deal than you may think, and you sure miss these when you don’t have them. Makes it that much easier to enjoy the 14-speaker JBL Audio system.

The rest of the interior on this, the entry-level XSE model, is a nice place to be; high-quality materials, tight panel gaps and cushy seats (that are a little flat, it must be said) are the orders of the day. That, and a big back seat that’s great for legroom though headroom is a little snugger than I’d prefer. That, of course, is what happens when you have such a slanted roof.

The XSE model – in addition to being the base model, it’s also the sporty one, they say – adds some pleasing exterior details in addition to the details discussed earlier about the exterior. Your eyes aren’t playing tricks on you – those are actual smoked tail-lamps you’re seeing, and quad tailpipes. Quad tailpipes! On an Avalon! They actually sound pretty good, too, when you really get on the throttle. They’ve also blacked-out all the logos; it’s a cool effect, I guess, though it can be seen as a little chintzy as that’s a pretty aftermarket thing to do and I’m not sure how many Avalon buyers are going to be all that into a detail like that. 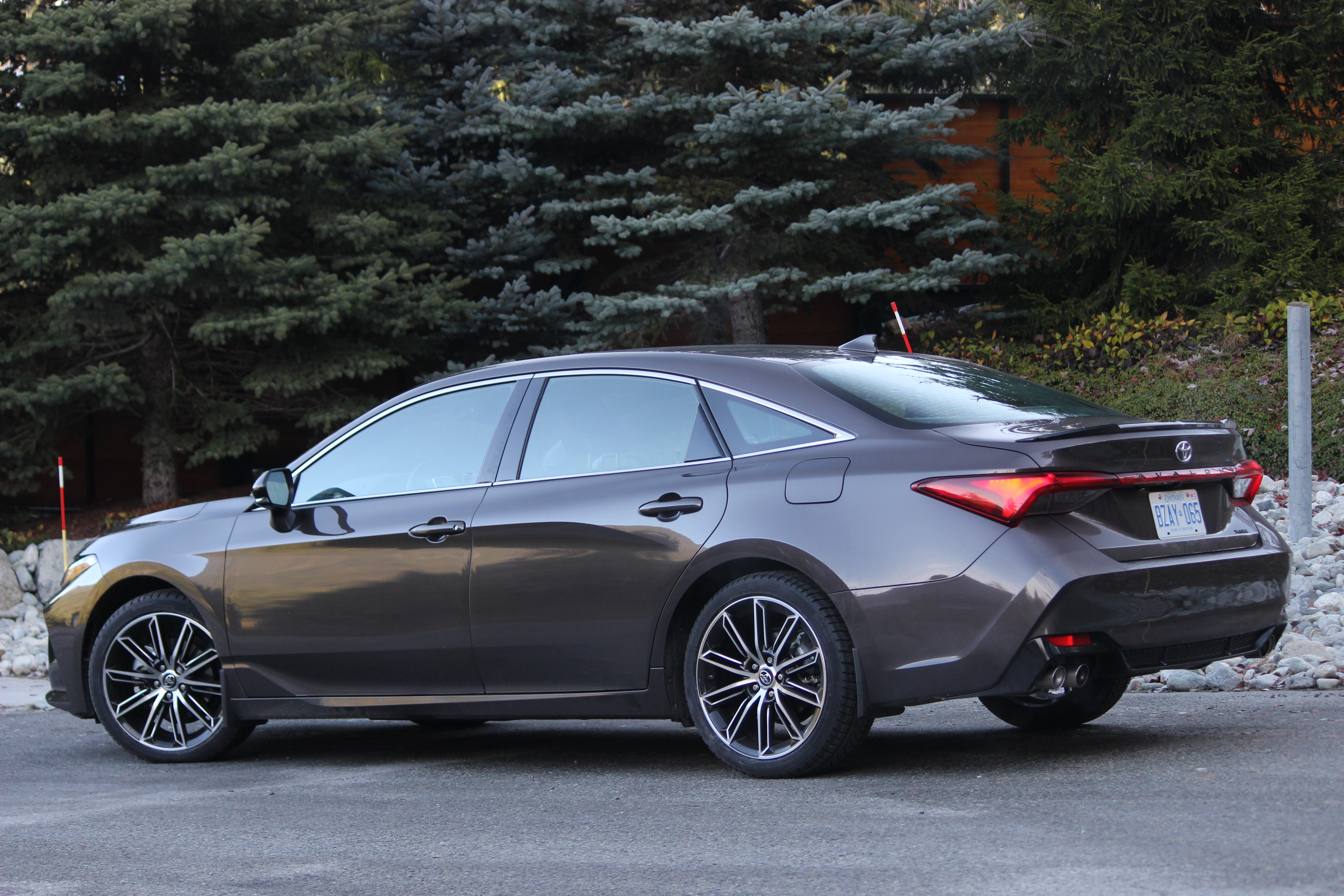 They’ll likely like the power, though. With the Avalon, you get one engine: a 3.5L V6, good for 301 hp, fed to the front wheels through an eight-speed auto. There is a hybrid version available down south, but we’ve seen no indication that model will be coming up here. At the outset, what we have is a smooth powertrain that, being naturally-aspirated, gets its power down smoothly and efficiently. The “sportier” XSE version may not make any more power than a standard Avalon, but while I’m all for more power, I’m fairly certain most will be perfectly happy with what’s on offer here. The only real detriment I found – and I’ve driven both the XSE and Limited trims – is that on both cars, I found the engine to get a little harsh as the revs climb. I also had the opportunity to drive an Avalon back-to-back with its Lexus ES cousin and there’s no question which car was the smoother experience. That’s no surprise; after all, the Lexus is the luxury model and parent company Toyota is going to be sure to differentiate between the two. Still found it a little surprising, a theme that continues with the ride.

Don’t get me wrong; no one is ever going to call the Avalon “rough” when it comes to its ride, but certain, smaller, harsher bumps did cause a little more cowl shake than I would have liked. Call it a false expectation if you want, but I thought it would be a little smoother than this.

While the XSE doesn’t add more power, you do get revised suspension settings that firm things up a little, hence the ride issues. What it does make for, however, is a car that responds well in corners, from turn-in to body control; the former is less important at this level, the latter, much more so. If you’re Toyota, you don’t want owners and occupants of your flagship sedan to be sliding to and fro, right? It was imperative that they made sure they got this aspect right.

Actually, I’d say that aside from the sometimes crashy ride, the Avalon gets most things right: smooth powertrain, spacious, good view out, loads of tech, and even some stylistic flare. If the ride’s too much for you, there’s always the Limited version, which will run you more money, but softens the chassis a little. I was intrigued buy the Avalon when I first encountered it, and while I wouldn’t say it blew me away like the styling suggested it might, I did enjoy my time with it and it functions as advertised. It will never sell anything close to a Camry, but if there are folks out there that want a quasi-Lexus experience without the stigma of a luxury brand’s emblem on their grille, the Avalon fits the bill. 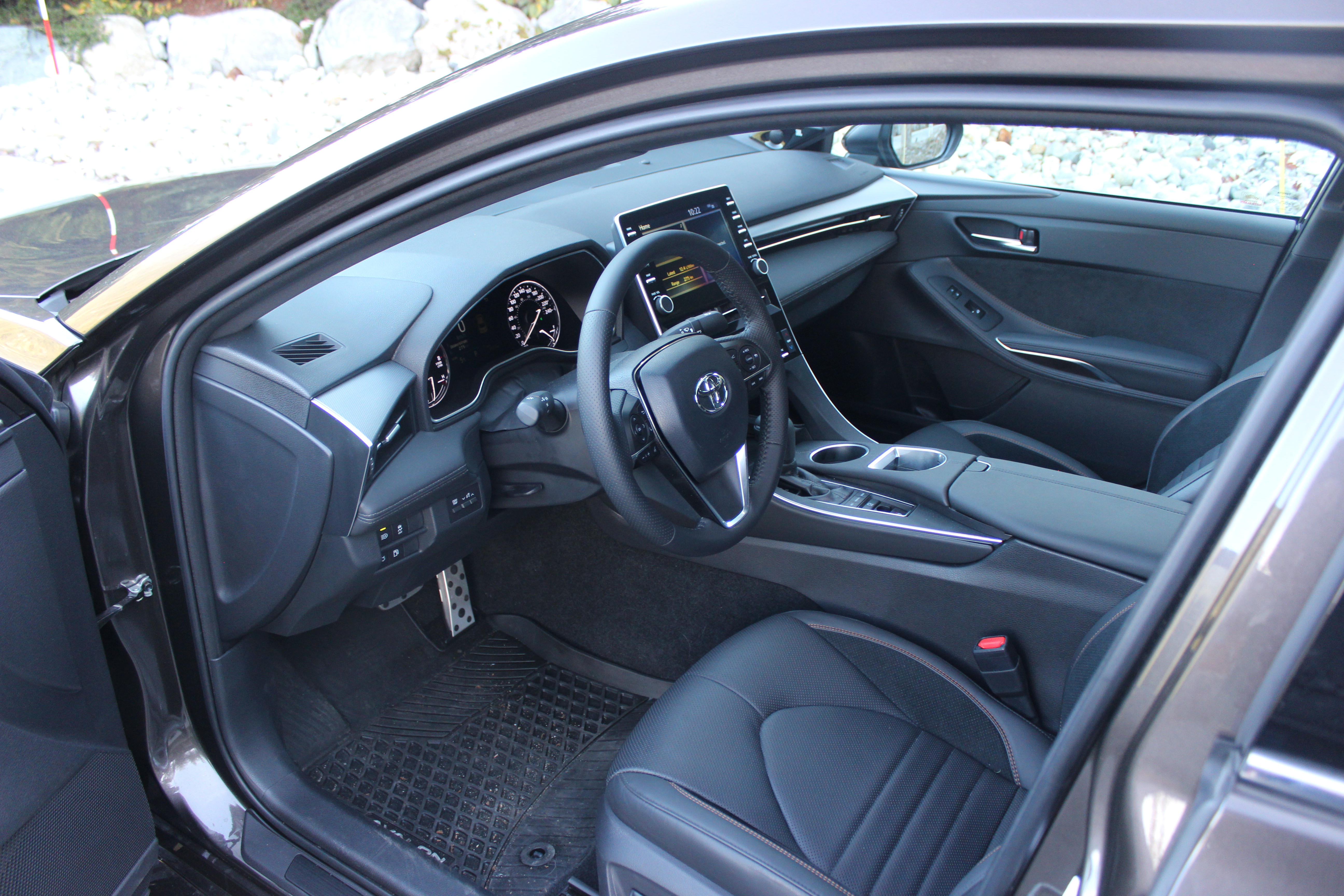