Out to conquer the segment, with a hybrid in tow
By Vincent Aubé

Monterey, CA – In the lead group at the front of the very crowded compact SUV segment – see our ranking of the Top 10 Compact SUVs in Canada – one model has been a constant presence since before the turn of the decade. The Toyota RAV4 small utility model has even become the top model for the brand in North America. The model is a big deal for Toyota, which is why it’s not really surprising that the 2019 edition, which we headed out to the Monterey region in California to test drive, arrives a bit later this year, with a more varied and highly competitive trim line in tow.

The Japanese automaker clearly is no longer content to ride in the lead group in this category; it wants to break away and lead it all by itself. Remember that this is a category that features a representative from every single manufacturer in the game, without exception.

Toyota’s strategy to gain dominance begins with a return of the hybrid variant, which fits in with the automaker’s objective to double the number of electric vehicles it sells. (In recent days we’ve also seen Toyota announce a hybrid version of the Corolla sedan).

The RAV4’s success goes far beyond the hybrid model, of course, and the regular combustion-engine version is on the menu for 2019 as well, no surprise there. What’s more, this year Toyota is even adding a little dose of off-road driving excitement to the SUV with the introduction of a Trail version, which features a more truck-like physique as well as enhanced capabilities when the terrain is more uneven. 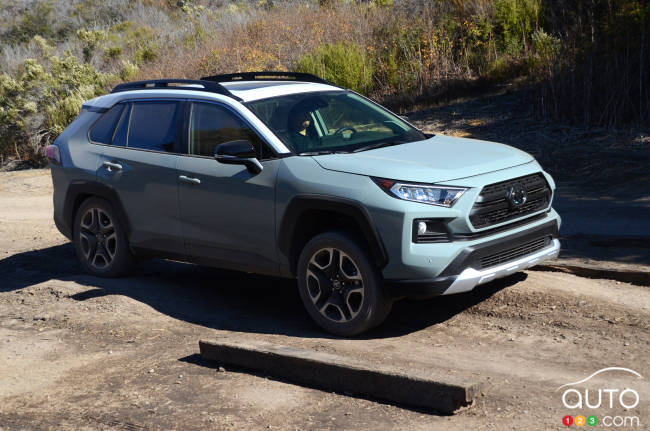 So important is the RAV4 for Toyota that the marching orders for the design team included dressing the popular model in three different garbs. The base model, equipped with the combustion engine, is actually pretty similar to the hybrid model, thanks to its front end that carries the Toyota badge higher up.

Obviously, the Hybrid version carries the HYBRID lettering on its flanks, but it also gets unique light clusters and wheel design. Toyota is even offering an sportier-looking XSE version running on the hybrid powertrain.

As for that Trail edition, it speaks to consumers who want to advertise their adventurous spirit. The model sports a front grille that looks strangely like the one on the Tacoma pickup. The 19-inch wheels of this version are also unique, while the two-tone treatment is a wink and a nod to the FJ Cruiser.

Our first encounter with the 2019 RAV4 makes clear Toyota’s desire to give its cash-cow SUV a new image, that of a more rugged utility model, the idea being that it will stand out more in a sea of crossovers that all resemble each other. 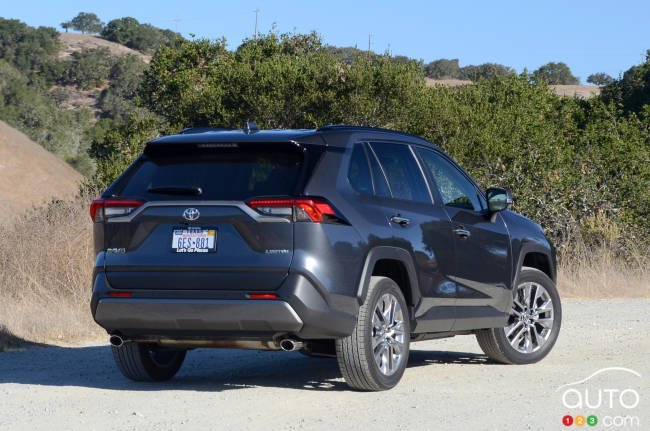 Some reinforcements under the hood, and even more with the hybrid!
Toyota could have chosen the easy path by holding on to the powertrains first introduced in 2013. But the 2019 RAV4 gets two wholly new engines, which are in fact very similar to those the Japanese automaker gave its Camry just last year. The base model gets a 2.5L 4-cylinder with an output of 203 hp, bolted to a new-to-the-model 8-speed automatic transmission. The gas-engine RAV4 is also available with two- or four-wheel drive, because as much as we Canadians go on about winter driving and all that, some folks just don’t really need AWD.

In the hybrid version, the 4-cylinder Atkinson cycle engine is backed by a 45 kW electric motor, which brings the total output to 219 hp. Like with Toyota’s other hybrids, the transmission is a CVT that’s charged with transmitting all that power to the four wheels, the only type of configuration offered with the electrified model.

Take note that the Trail edition is equipped with its own traction management system for driving over rough terrain, so that the driver can choose the type of grip desired via a knob located near the gear shifter. 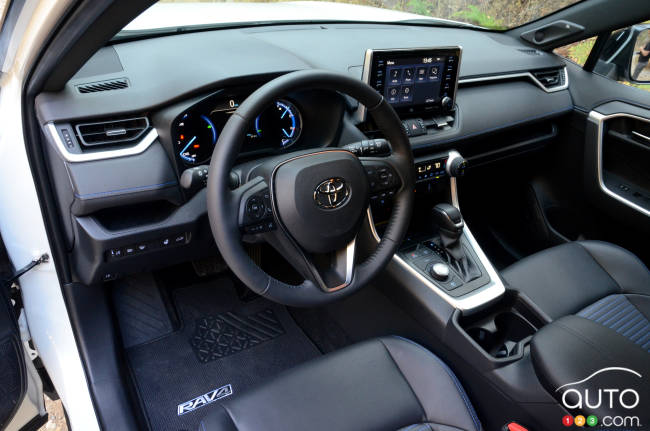 At the wheel of the three versions
Though by necessity our time behind the wheel of each version of the new 2019 RAV4 was limited, the organizers of the launch event did ensure that the journalists on hand could try out several variants during the day.

One thing was quite clear:  the driving experience has been enhanced in the new RAV4. It’ll never by confused with a Porsche Cayenne, of course, but in comparison with the outgoing model, the 2019 edition is more dynamic, from the steering to the suspension system. It feels to us like the stiffness of the chassis has a lot to do with the improvement, and with the reassuring drive the SUV now delivers.

The 2.5L 4-cylinder is more than sufficient for the RAV4, and the 8-speed automatic transmission showed no weaknesses in terms of gear shifts… nearly all the time! I would have liked a bit more time driving the two gasoline-engine RAV4s to really determine the unit’s performance, which I found slightly irregular during a few accelerations. Still, the transmission is widely in use in the Toyota lineup, which leads me to think I misread some gear shifts…

The hybrid RAV4 is even more energetic, thanks to its more-powerful engine-motor setup but also to the CVT, which surprised me greatly with its performance, much less elastic than I’d expected. Toyota, like other manufacturers, has succeeded in making its CVT easier to live with. I also found that the transition between the gasoline engine and the electric motor is more subtle than before, which in the long run helps improve the vehicle’s on-road performance. 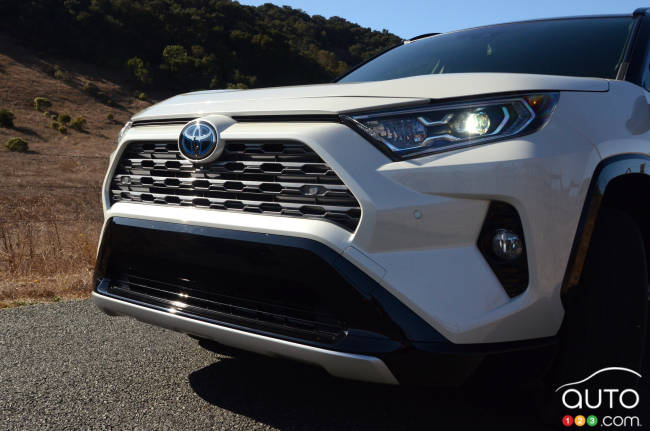 We were also given the opportunity to drive the Trail edition on an off-road course. This RAV4 showed it could effortlessly get itself out of difficult spots thanks to the all-wheel-drive system, which was adept at getting the right torque to the right wheels. While this function certainly works well, I’m not sure that consumers will use it on a daily basis. Maybe once you turn off the main highway as you near your cottage, then you’ll reach for the knob to activate it…

The last word
The test drive indicated to us that the 2019 Toyota RAV4 should surpass its predecessor in terms of sales, not only because of the wider choice of options available to buyers, but also because the new edition is more seductive and better-designed than the hugely popular outgoing edition.

The quality of execution has clearly been upgraded, especially inside, where the dashboard for example benefits from better materials and a much-improved presentation. The driving experience overall is also much better. And, we expect that the hybrid version will become a common sight on Canadian roads.
Source: https://www.auto123.com/en/car-reviews/2019-toyota-rav4-first-drive/65322/#39PbOHwSjebEUk0y.99