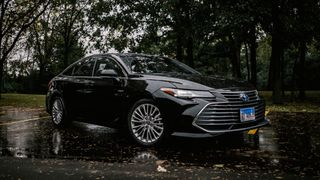 Most of us think of car ‘safety’ as the protection you need to avoid an accident. That’s true in many respects; most of the tech advancements of the past few years have focused on lane-keeping, brake mitigation, and autonomous driving. Yet, after testing the 2019 Toyota Avalon, it’s obvious there’s a new feature that helps when the car is parked.

The tech, called Bird’s Eye View Camera with Perimeter Scan, first debuted in the 2016 RAV 4. It’s the first time I’ve tested it in the Avalon, which is a new redesign of the sedan. To access the feature, you press an icon that looks like a car with a ring around it, then press the play button. It’s designed to help mostly when you are parked and ready to leave.

Cameras mounted on the side, front, and rear create a composite view of the area surrounding the car, stitching together what looks like a live video around the perimeter of the car. Perimeter Scan might freak you out a little because it’s so unique – it looks like a real-time video.

In most cases, you’d use the feature to see if there are any obstructions near the car. For example, I used the Bird’s Eye View Camera multiple times in a week-long test to see if I was too close to a curb after parking. It saves times because you don’t have to exit the vehicle, check how you parked, then get back in and make adjustments.

You can also use the feature – which looked crisp and bright in the center display – to see if you are too close to other cars, checking for any other approaching cars or pedestrians, and to look for anything lying around the vehicle, such a broken branch or a broken bottle.

The perimeter scan serves another purpose. In a parking lot at night, I used the feature to see if anyone was lurking next to the vehicle before I shifted into park. It might be an extra step, and perhaps not that important where I live which is a busy, populated small town. In a darker area in an urban setting when no one is around, it’s a good way to scan for undesirables.

In the future, cars will be able to warn us about objects in different ways. Right now, a few vehicles like the 2019 Infiniti QX60 can warn you as you are backing up about someone crossing behind the vehicle in your blind spot, and can stop the car if you don’t react.

Sensors will eventually become much more powerful. Using algorithms to detect the size of objects, the speed of approaching cars, and the proximity to curbs, the car might warn you that you are too close to an object (or offer to adjust your position automatically). Someday, cars will likely detect if there is a person lurking nearby, likely based on infrared cameras. The car might notify you about a threat and even offer to car the authorities with one click.

The Toyota Avalon isn’t that advanced yet – Perimeter Scan is mostly meant for a quick scan to see if there are any problems, but doesn’t know the difference between a shopping cart and curb.

Sensors in cars have advanced recently so that they can detect the difference between cars, pedestrians, or large animals (the latter is a feature available in some recent Volvo cars). As cars become smarter, parking and safety in a dark parking lot will improve even more.

On The Road is TechRadar’s regular look at the futuristic tech in today’s hottest cars. John Brandon, a journalist who’s been writing about cars for 12 years, puts a new car and its cutting-edge tech through the paces every week. One goal: To find out which new technologies will lead us to fully driverless cars.