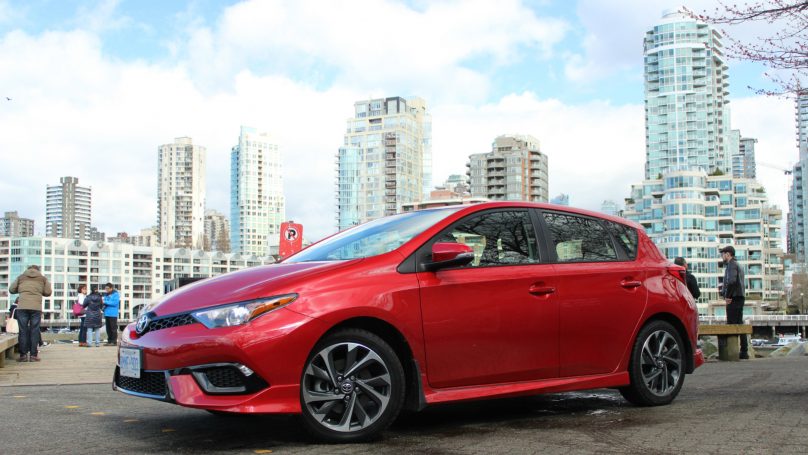 Many said they saw the writing on the wall (likely in some fancy graffiti, if the brand’s various youth-above-all marketing campaigns were any indication) that Scion was on its way out; Toyota, long a big seller of properly “oatmeal” cars like the Corolla and Camry sedans was trying to trim some grey hairs into a Mohawk and shake up their image a bit.

Unfortunately, the recession hit and a group that already didn’t buy that many new cars began buying even less, and Scion (literally meaning “a descendant of a notable family”) was doomed. It didn’t help that some of the brands signature models – namely the funky, boxy xB hatch – had already been softened and normalized, then erased, causing yet another hit to the brand’s identity.

Still; some very cool products remained, and would continue to serve under the Toyota banner – the FR-S sports car, and the iM you see here. The FR-S became the 86 but the iM retained its name, with Toyota adding “Corolla” because why not?

The Corolla name sells. Why not add a hatch to the portfolio?

Dan Heyman: A mighty fine-looking hatch, if you ask me. The styling hasn’t changed one iota in the transition, which is no bad thing because – and I can’t believe iM saying this – the iM might just be the best-looking car in the compact hatch segment.

That, of course, depends on what you’re looking for; if you want something a little more serene and laid back, then maybe the Cruze hatch or Mazda3 is the better choice for you. If you want something that will turn a few more heads, though, then the iM is the answer.

An ultra-aggressive front fascia courtesy of a pointy nose and sharp headlamp lenses—two-tone 17-inch alloy wheels as standard, sculpted rocker panels, a deep front splitter that almost looks aftermarket; it’s all here, it’s all standard and it’s all quite cool and ultra-modern—looking more European along the lines of something you’d see from Peugeot or even Citroën. It’s all thanks to the iM being a “world car” that has to be able to sell in a variety of markets, which means ticking off a lot of styling boxes.

The interior isn’t quite as advanced – the dash is fairly straight-edged and without a whole lot of flare – but it’s roomy enough as a result, with plenty of space for stray knees and elbows. The back seats are going to be a squeeze for the longer-limbed—that’s the nature of the beast in this segment, but they are equipped to fit a child seat and fold completely flat; leave them up, however, and there’s still room for 589L of storage.

Lacey Elliott:  I am going to agree with Dan and spare you more of his iM jokes; this is one of the best looking cars in its class.  It’s sharp lines and strong angles give it a bold and sporty appearance. It has people doing a double take, especially when you see it coming at you from your rearview mirror. As a ‘world car’, it will appeal to a variety of people. Its fresh, modern and sleek without being too much of anything. I love the look of the standard two-tone 17-inch wheels.

Inside is simple and well laid out. Toyota uses a nice mix of different fabrics and finishes to dress it up a bit. I am not a fan of the gloss piano black finish because it tends to show dust and fingerprints. The redundant controls on the steering wheel are placed for ease of use but the steering wheel feels a bit too thick in my hands.

The iM comes standard with a 7” touch screen located right in the middle of the dash.  The graphics could stand to be updated but the system is easy to read and takes no time to figure out.

The rear seats split and fold 60/40 and the result is an incredible amount of options for both cargo, dogs and friends. 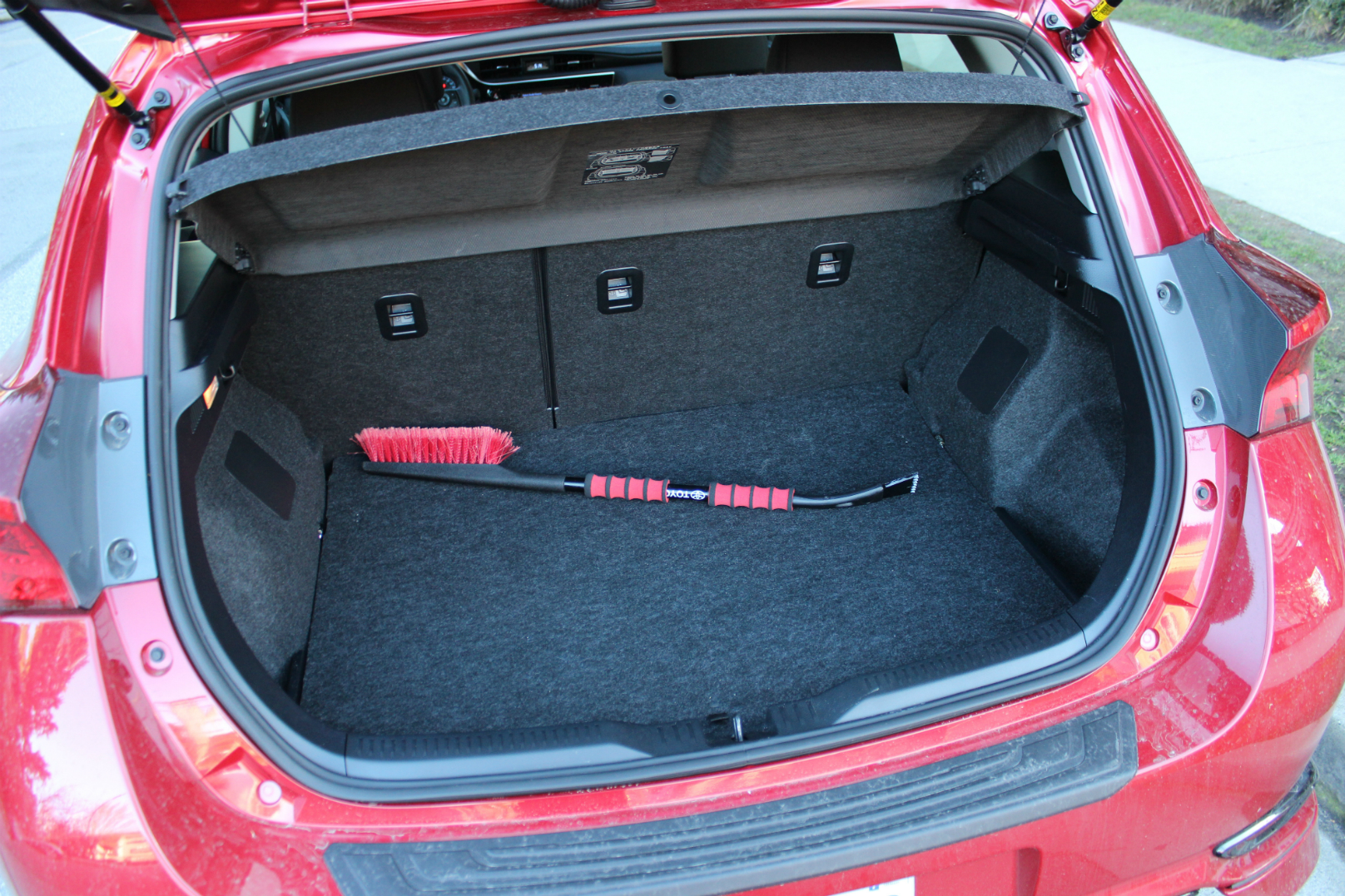 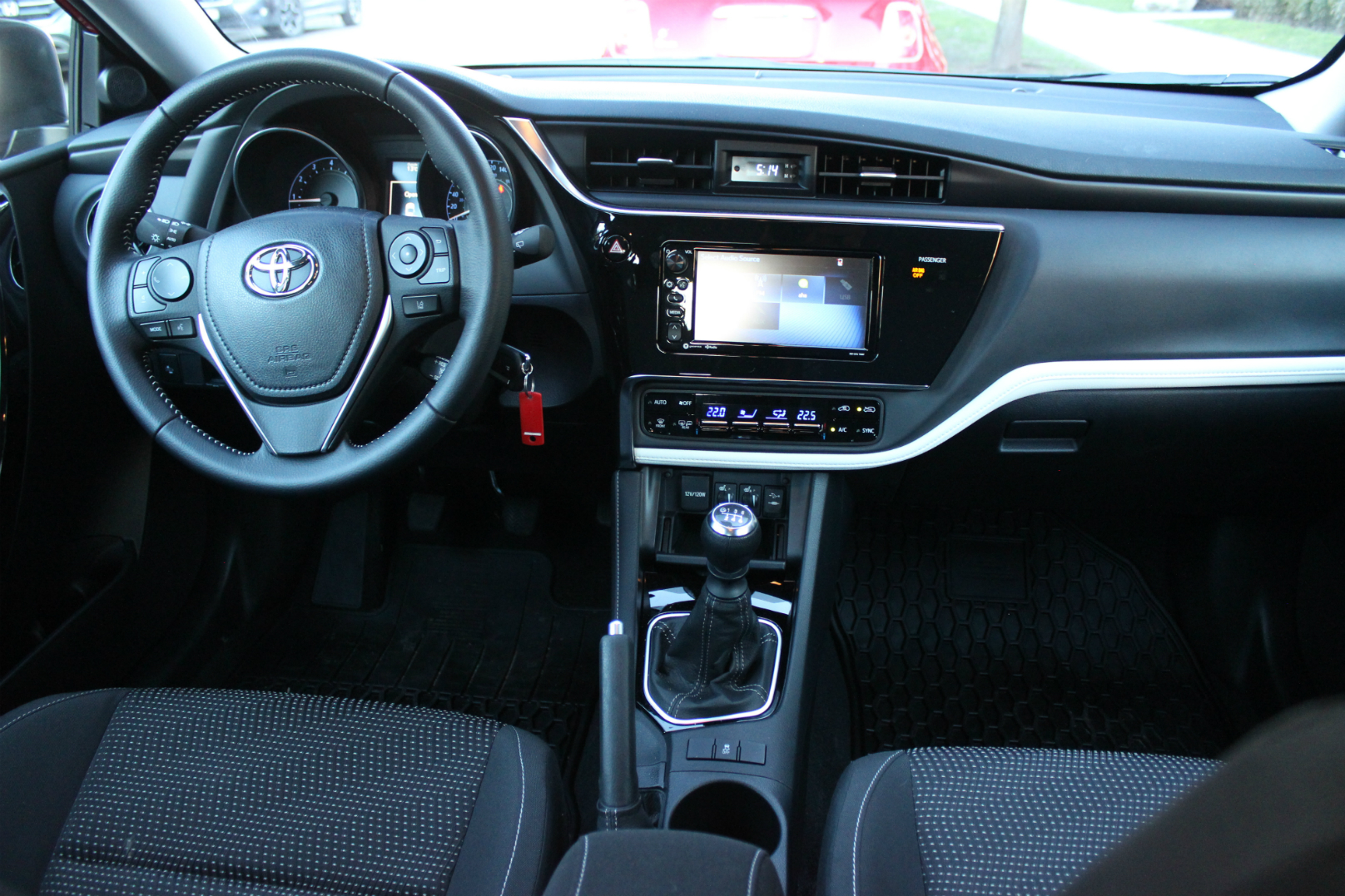 DH: When Scion was Scion, a big part of the appeal was how few trim choices there were and that they didn’t really “do” option packages, making the buying process that much easier.

It may be it, but it gets you Bluetooth, a 7-inch display screen, six speaker audio (one of the few dealer-installed options is an amp for said audio), heated front seats (that’s a new-for-2017 addition) plus all those great exterior bits.

So it’s great you get all that, but is it any good? Well, six speakers is not a huge count, but I nevertheless found the audio plenty satisfying. I’m less enamoured with the infotainment interface as I find the graphics to be clunky-looking and old, but it’s not like they don’t respond as advertised.

LE: The first time I got behind the wheel of the Corolla iM was during a Toyota Safety Sense event.  For 2017, Toyota Safety Sense C comes as standard equipment.  The Pre-Collision warning system, Lane Departure Alert and automatic high beams are items that are usually found on higher-priced luxury vehicles.  If you have a family or safety is a super important item on your checklist for a new car, the iM is an easy choice.  It also comes with every airbag imaginable and even has a tire pressure monitoring system.

As Dan mentioned, Scion was a mono-spec vehicle meaning that they offered one trim and no ‘packages’.  This Corolla is the same. The only choices you need to make are what colour you would like and whether you want the CVT or a six-speed manual.  I personally love how easy this makes things when you are shopping for a car.

Just over $22,000 gets you into the manual transmission and just over $23,000 for the CVT.  No matter which you choose, you get voice recognition, back up camera, automatic climate control, keyless entry, heated front seats and six great sounding speakers. For most people, having all these items plus the advanced safety features is more than enough.

DH: It will be interesting to see what Lacey thinks of her CVT transmission; I only say this because the manual on my car was quite good—with the exception of some slightly spongy clutch take-up. Otherwise, the throws aren’t too long and the gates nicely spaced, ensuring that you never miss a gear.

You wouldn’t want to, either; the 134 hp you get from the naturally-aspirated four-banger isn’t bad, but the 126 lb-ft torque is down on the Mazda3 and Honda Civic hatch; the latter is the king in this department because the hatch version only gets Honda’s turbo 1.5L four but the fact remains the iM is not that powerful of a car. To my earlier point: you wouldn’t want to rob it of what acceleration it has by accidentally shifting to fifth instead of third.

Indeed, the real beauty of the iM’s on-road performance is the handling. The steering rack is a lively and direct one, sending you form apex to apex with hardly a turn of a wheel. The suspension, meanwhile, gets a double-wishbone rear set-up and MacPherson struts up front, all tuned for a slightly sportier feel overall. Add the lightweight alloy wheels, and what you get is a hatchback that drives in a much more sporting manner than something with a “Corolla” name should.

Which is the truly interesting bit. When Toyota first announced that they would be adding the “Corolla” name to the iM, both my colleagues and I were a little surprised they didn’t decide to re-ignite the “Matrix” name instead. The original version of that car was a popular choice and essentially a hatchback version of the Corolla.

Now, however, I can see how it all makes sense; folks that love Corollas but have always wanted a hatch now have the ability to do so, while the potential for attracting a whole new range of buyers to the Corolla brand is a very real one with this car. Of course, buyers will likely be checking themselves to make sure the Corolla sedan and its $16,390 cost of entry is just too much of a discount over the iM to pass up. The iM’s better cargo area, cooler styling and better-equipped interior, however, is worth the premium. 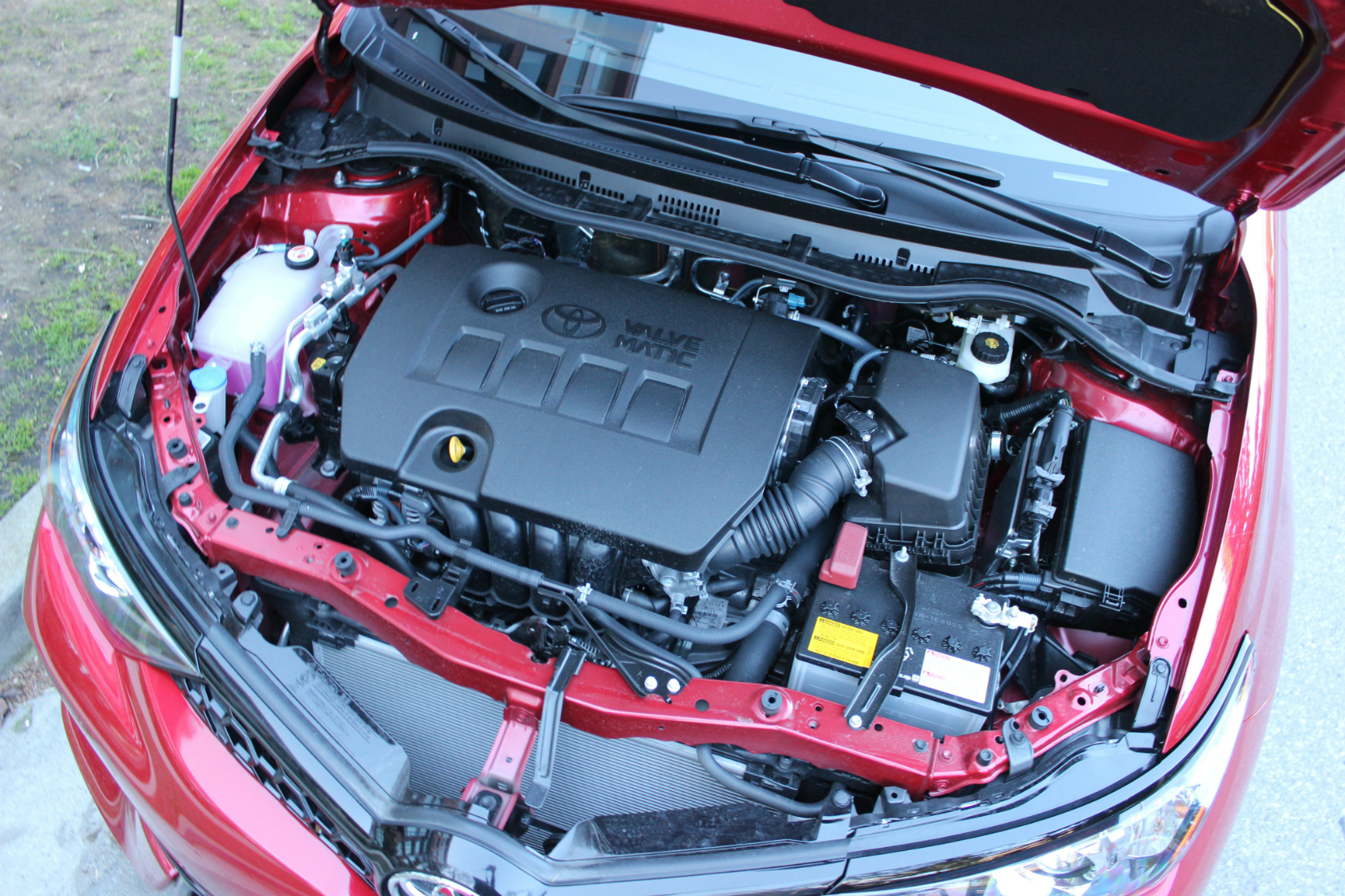 LE: The two transmissions I mentioned earlier are both matched to a 1.8 litre 4-cylinder engine.  After reading Dan’s thoughts on the manual, I am sure you can’t go wrong with either choice. With 137hp, speed is not what this car is meant for. Sport mode gets the engine revving a bit higher and will let you pass a bit quicker when needed.

My second time behind the wheel I had a chance to run some errands and see how this car would work for my every day life.  It is a comfortable commuter car that does everything nicely. The steering feel is a bit vague but I have no complaints. Sitting in traffic or cruising down the highway I know that it will do what I need it to do.

The interior is quiet and only a bit of engine noise creeps inside when you push the gas pedal.

Compare this iM to some of its competitors like the Honda Civic or Hyundai Elantra and it might seem that it’s over priced.  But don’t forget that this hatch comes with a lot of items that add on to the competitors base price.

With Toyota Safety Sense and some great features; iM sure you will be impressed. 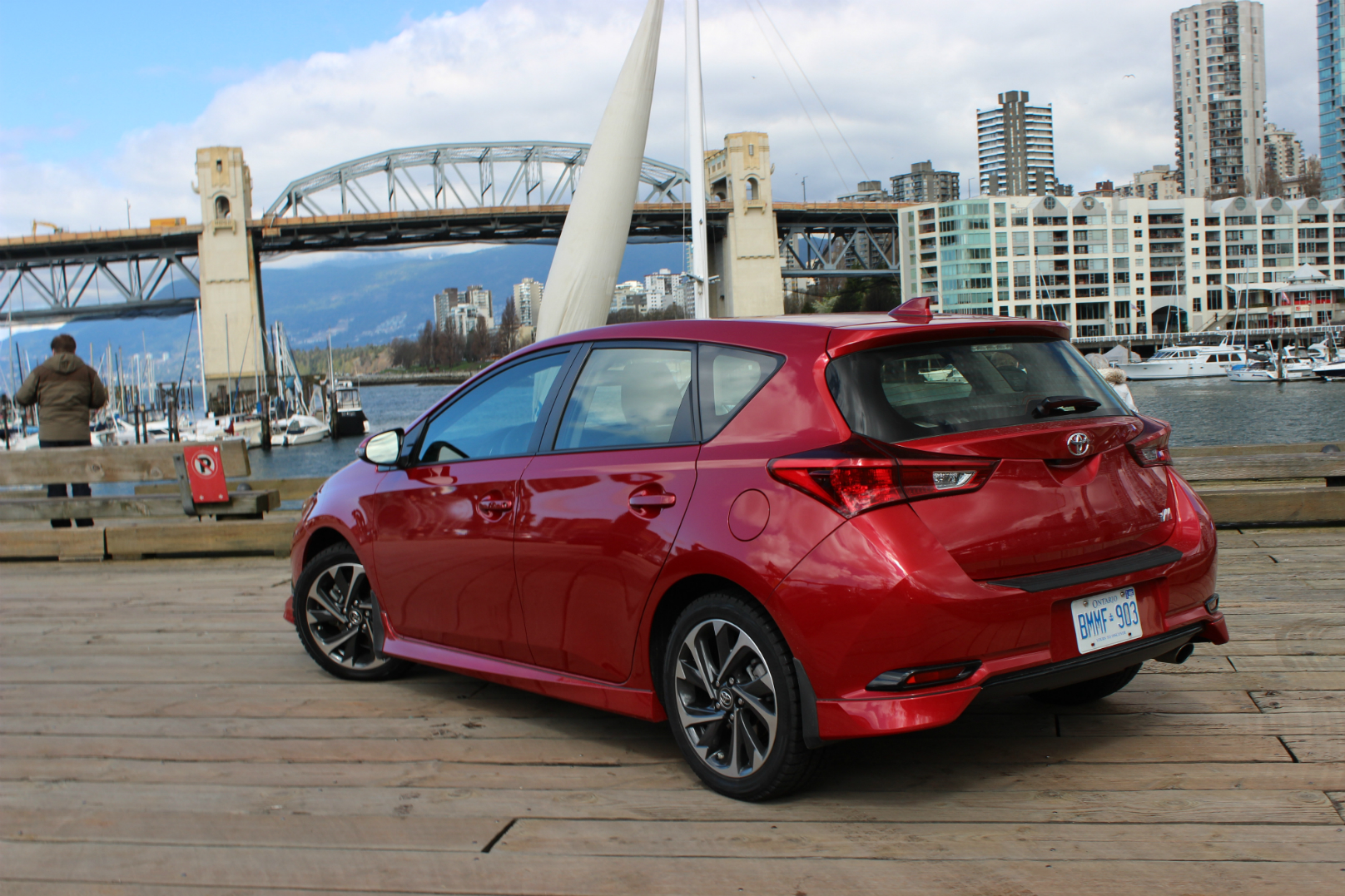