Toyota just unveiled a special edition version of its 86, the drift-artist formerly known as Scion FR-S. The 860 Special Edition is designed to move the 86 slightly upmarket and see whether the low-volume sports car can appeal to an, ahem, more mature and slightly more well off consumer, stereotypically described as having a mid-life crisis.

Good news is that for all the changes besetting the Toyota/Subaru joint-venture sports car, those of us who have always been drawn to sufficiently powered, lightweight sports cars won’t like the 86 any less than before. Toyota figures the base model 86 will appeal to young, single buyers, while the 86 860 Special Edition is for the “empty nester.”

The point is that the 2017 Toyota 86, like its Subaru BRZ sibling, belongs to a sub-segment consisting of just two other competitors, the inevitable Mazda MX-5 Miata, and the Fiat 124 Spider. Small, tight, simple, lightweight, rear-wheel-drive, and designed to carve up a twisty road rather than take on Camaros and Mustangs between Woodward Avenue stoplights. What could Toyota possibly do to mess up its four-year-old take on this formula? 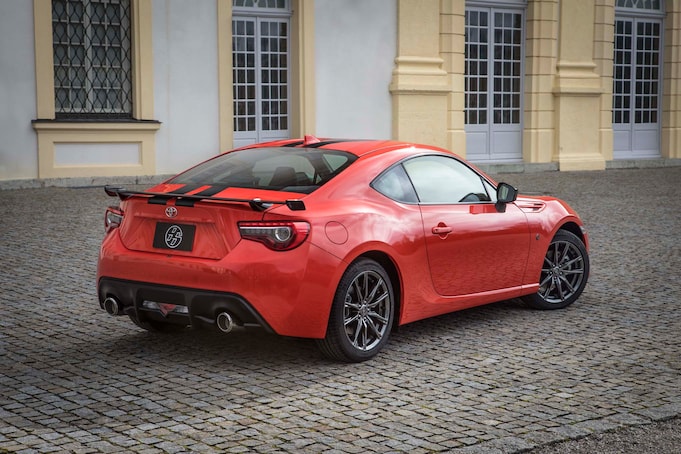 Toyota brought us to Switzerland and Germany to sample a mixed bag of new 86s following the 2017 Geneva Motor Show. The 860 Special Edition on display (but not driven) was a one-off right-hand-drive prototype, though this S.E. will be sold only in the U.S. I drove several European-spec models, each with various elements of the ’17 model year update.

Cosmetically, the facelifted ’17 model consists of a new front fascia and rear lower fascia, those plastic body parts that don’t require a huge tear-up prior to a complete redesign. The new front fascia, which extends from the hoodline to the underbody, now has an air dam on the lower edge for better aerodynamics. There are subtle aero elements added to the profile, which consist of convex notches in the front and rear side-marker lights, and the body-colored horizontal piece running through the side-vent designs in the front fenders.

There’s a smaller-diameter steering wheel, upgraded seat materials and Grand Lux simulated suede added to the passenger-side dash panel. The Alcantara competitor already supplies the material for the top of the door panels and the instrument cluster shroud. A new 4.2-inch Thin Film Transistor center dash screen is upgraded with a g-meter, torque curve display and stopwatch. Controls remain too small and finicky for the midlife crisis crowd. The Scion FR-S’s “snow” mode has been replaced with a second ABS mode.

Under the sheetmetal, redesigned intake runners add 5 horsepower to the old Scion FR-S’s 200, but the increase is for North American manual models only. The rear end ratio has been lowered from 4.1:1 to 4.3:1 and the rear structure of the car has additional braces to make the chassis stiffer, allowing Toyota ZR/Toyota Gazoo Racing (which campaigns 86s in sports car and rally racing in Europe) chief engineer Tetsuya Tada to stiffen the front suspension while softening the rear suspension and adding a larger rear anti-roll bar.

The changes “make the new 86 closer to the new Subaru BRZ,” Tada-san says. Whereas the old Scion FR-S was tuned to compete in drift events with little or no aftermarket modification, the new Toyota 86 is more planted, a quality that drifters can tune out with a few non-stock parts.

This time of year, the test cars had to wear various brands’ winter tires while being driven through Northwest Europe, though they didn’t feel as squirmy as, say, Bridgestone Blizzaks feel on a Mazda Miata.

“I didn’t want different tires to affect the handling,” Tada says in broken English (which is far better than my Japanese). The 86’s summer tire spec is the same, in fact, as on the Toyota Prius, though Tada concedes that winter tires on this sports car are not ideal. 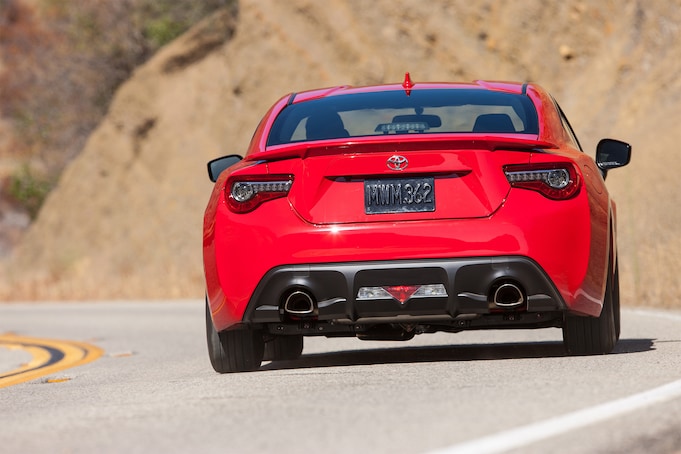 Slaloming right, then left, around numerous Swiss and German roundabouts (we also drove, briefly, through Austria and Lichtenstein) the 86’s rear wheels complied and took a set to offer good seat-of-the-pants feedback. The steering is quick, communicative and fabulous, and while the suspension is still stiff enough to transmit every road imperfection, the car doesn’t skate over bumps.

The 2.0-liter horizontally opposed Subaru four’s 205 horsepower feels like, well, 205 horsepower, but to repeat, if you’re as inclined toward this sort of sports car, it’s plenty. The 86 can quickly find its way out of a corner, so long as you’re in the right gear. The 86’s six-speed, enhanced with a new set of synchros, begs for constant rowing, anyway.

Tada-san bristles at the suggestion of adding a turbocharger – say, for example, the Subaru WRX’s 268-hp boxer engine, which would negatively affect the linearity of the power band. Unfortunately, the throttle and brake pedals are just a bit too far apart for easy heel-and-toe downshifts — a result, Tada says, of the fallout from Toyota’s unintended acceleration debacle earlier this decade.

The updates add just 17.6 pounds to the new model, Tada says. Toyota and Subaru engineered this chassis to accommodate a convertible version without the need for heavy bracing, but that won’t happen with this generation model. Tada would like a convertible from the get-go for a second-generation model, but he hinted that Toyota has yet to sign off on an 86 Mark II. 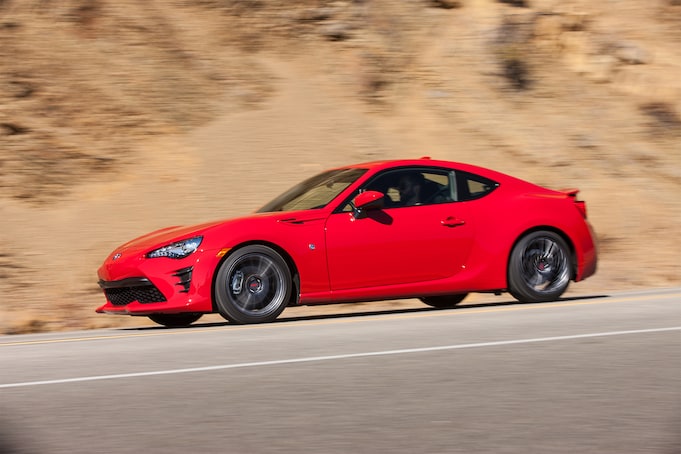 The Toyota 86 is fun and responsive on any road, in any traffic, so long as you’re inclined to this sort of thing as much as we are. You shouldn’t need a Special Edition to convince you, whatever your age, though there’s nothing wrong with spending a few thousand dollars more on the 860. It’s really a 1,720, because 860 will be offered in Supernova Orange and 860 will be offered in Halo White, either with black vertical stripes running nose through top to tail, bisecting a European-spec rear spoiler painted both gloss- and flat-black. There are black-chrome 18-inch alloys, black-capped, heated sideview mirrors, a black underpan and lower rear fascia. Inside you’ll find black leather seats with orange trim, plus orange trim on the steering wheel, handbrake and gearshift boots, keyless pushbutton start and dual-zone climate control.

Toyota will use the Special Edition to gauge whether it should offer an upmarket 86 for 2018 and beyond, and there’s no reasonable argument against it. Even with the special kit, the 2017 Toyota 86 860 Special Edition lists for $30,040 for the six-speed manual (the six-speed automatic is another $720), which is $2,900 more than a standard 86, and $2,100 more than a 2017 Subaru BRZ Limited when equipped with optional 17-inch STI black alloy wheels. Hurry, if you want your 860 properly equipped: boatloads with all 1,520 Toyota 86 860 Special Editions are approaching U.S. ports as we speak, and brand manager Paul Czaplicki expects about 60 percent of them, like the standard 86, will be manuals. That’s just 1,032 cars. Perhaps they should be called the Toyota 86 516 Special Edition.