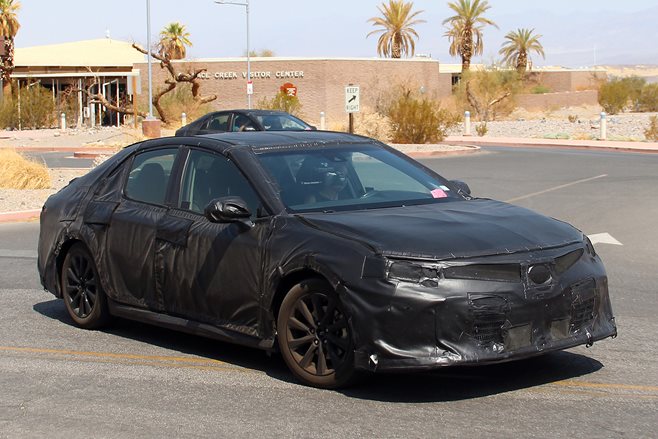 This 2018 Toyota Camry is our first glimpse of the future family sedan once Australian local manufacturing ceases forever.

Life will go on after the final Australian-made car ever rolls off the assembly line later next year, as these spy pictures of the 2018 Toyota Camry reveal.

Ending six generations of the Melbourne-made Toyota Camry when production ceases there in the final quarter of 2017, the venerable Toyota midsizer might debut as soon in January at the Detroit Auto Show, before arriving reinvented and reinvigorated with a much more contemporary design than before against the all-new fully imported Holden Commodore later next year.

That’s why this US-snapped prototype is wearing such heavy cladding – the existing model first seen in 2011 had failed to fire as strongly as expected in the key US market because of its perceived styling conservatism.

In an unprecedented move, Toyota was forced to expensively redesign the facelift for the 2014 model year, in order to rekindle public interest. The move worked, but the Japanese juggernaut won’t be making that mistake again.

This is a very positive development too, since the 2018 Camry’s box-fresh front-drive chassis is said to be lighter, stronger, and far more resistant to noise/vibration/harshness than the existing model launched late in 2011

On the engine front, expect a development of the not-so-old 2.5-litre twin-cam four-cylinder petrol engine to power the vast majority of variants on offer, while a hybrid version is also a dead-cert.

We also hear that Toyota’s impressive new 2.0-litre turbo (think Lexus IS200t) might supplement or even replace the 3.5-litre V6 in the model currently sold in Australia as the Aurion, though that has yet to be confirmed.

Finally, while it is clear that the Camry is evolving into a better midsized family sedan than what is currently on offer, the question of where it will come from lingers; will Toyota switch to Thailand sourcing like Honda does with Accord, or will it follow in the related Kluger SUV’s steps and sire from North America?

The latter isn’t just about idle speculation either, since the next Camry is likely to be significantly more expensive than the Aussie-built one as a result.

Government contracts and incentives have long kept existing and previous iterations cheaper, but next time around, Toyota won’t have the burden of keeping its Australian factory ticking over. So we’re expecting the equivalent of today’s base Altise to eschew the $26,490 pricing for something closer to the Subaru Liberty’s $29,990 ask.

If that’s the case, it will be interesting to see if the Camry can retain its position as Australia’s bestselling midsizer by far – this year it commands 47 percent of the segment, followed by the Mazda 6 with just 9.7 percent.