Toyota plans to introduce over 100 FC buses mainly in the Tokyo area, ahead of the Tokyo 2020 Olympic and Paralympic Games. 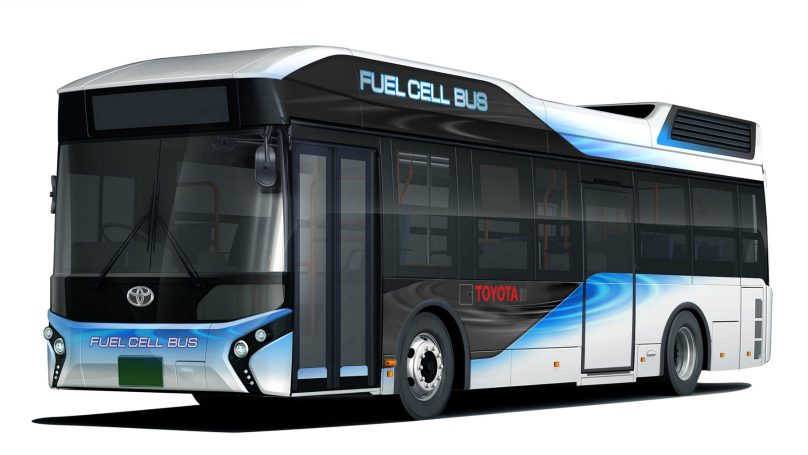 Having already undergone repeated field tests for practical use, the Bureau of Transportation of the Tokyo Metropolitan Government plans to utilize two of these FC buses as fixed-route buses.

Toyota plans to introduce over 100 FC buses mainly in the Tokyo area, ahead of the Tokyo 2020 Olympic and Paralympic Games.

In view of this, the FC buses will be sold for the first time in Japan in early 2017, so as to help increase the level of understanding by the general public of the utilization of FC buses as a form of public transportation.

The Toyota FC Bus was developed by Toyota, based on the company’s experience in developing FC buses together with Hino Motors, Ltd. (Hino).

The Toyota Fuel Cell System (TFCS), which was developed for the Mirai fuel cell vehicle (FCV), has been adopted to provide better energy efficiency in comparison with internal combustion engines, as well as to deliver superior environmental performance with no CO2 emissions or substances of concern (SOCs) when driving.

With a power supply capable of a 9 kW maximum output, and a large capacity of electricity supply at 235 kWh, the FC bus can be used as a power source in the event of disasters, such as at evacuation sites such as in school gymnasiums4 or, its electricity supply can also be harnessed for home electric appliance use.

The Toyota Group considers the use of hydrogen to be a powerful source of energy for the future.

Toyota has released the Mirai FCV, while also engaging in the technological and product development of FC buses, fuel cell forklifts, as well as stationary fuel cells for use in homes.

Going forward, the group will accelerate developments in a unified manner, so as to contribute to the realization of a hydrogen-based society.