The 2000GT Proved Toyota Could Build a World-Class Sports Car

There’s a reason why a Toyota 2000GT became the first million-dollar Japanese car, and it’s not just because the classic car market was strong when that particular car crossed the auction block. It’s one of the most important cars in Toyota’s history and one of the rarest, with just 351 built.

To understand the 2000GT, you need to understand the Japanese Auto Industry leading up to the 2000GT’s debut as a concept in 1965. Before World War II, Japanese cars were mainly licensed or adapted versions of Western cars. Exports were virtually nonexistent.

After the War, domestic production increased with the rise of the Kei car, which made car ownership a possibility for the wider Japanese public. The Korean War also sparked a boom in truck production, giving birth to the mighty Toyota Land Cruiser.

Business was booming for Japanese automakers in the 1960s, but they didn’t have much luck outside their home market. Thanks to cars that weren’t exactly optimized for the U.S. and Europe and, of course, a healthy dose of racism, Japanese cars were seen as a joke outside Japan.

The first Toyota brought to the U.S., the Toyopet Crown, which began sales in 1958, was an unmitigated disaster. Toyota only sold 287 Crowns in its first full year in the U.S., according toMotor Trend. An auspicious start for the third-highest selling brand in the U.S. in 2015. Things weren’t much better in the UK, according to BBC program James May’s Cars of the People.

“I was only one-year-old when the [Daihatsu] Compagno arrived,” said May of the first Japanese car to arrive in the UK, in 1964. “But even ten years later, I remember we as British schoolboys thought that Japanese cars were a bit of a joke.”

So, the Japanese auto industry, confident in its abilities, had something to prove, but there was another phenomenon taking place in Japan during the 1960s. The first Japanese Grand Prix was held in 1963 and generated a significant interest in motorsports and performance among Japanese drivers, according to Toyota GB’s history of the 2000GT. 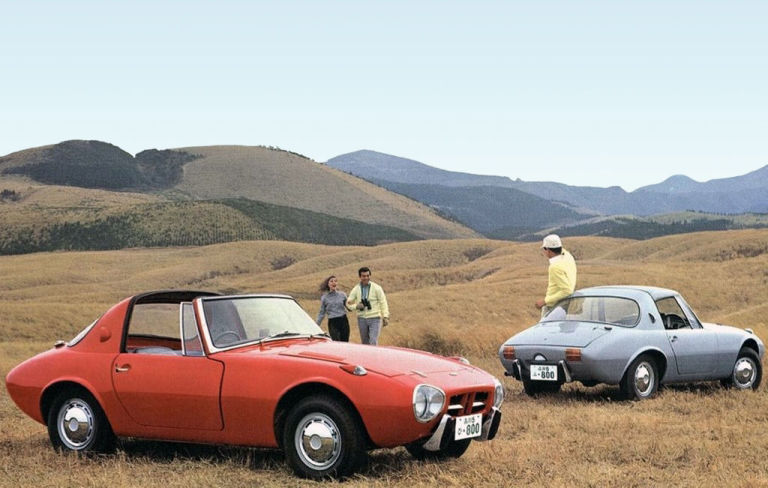 Both Honda’s and Datsun’s first roadsters–the S500 and Fairlady 1500, respectively–arrived in 1963 and Toyota followed suit in 1965 with the Sports 800. The Sports 800 was a minimalist take on the sports car, with a light alloy body, a 44-hp flat-twin engine and a removable Targa top.

While the Sports 800 was an interesting car, Toyota wanted to build a true flagship to prove its technological prowess to the world. The Sports 800 didn’t have much appeal outside Japan, so it was never officially exported and only a handful of left-hand-drive models were built. Toyota tapped Yamaha to help design and engineer its flagship, which debuted in prototype form at the 1965 Tokyo Motorshow to great fanfare. 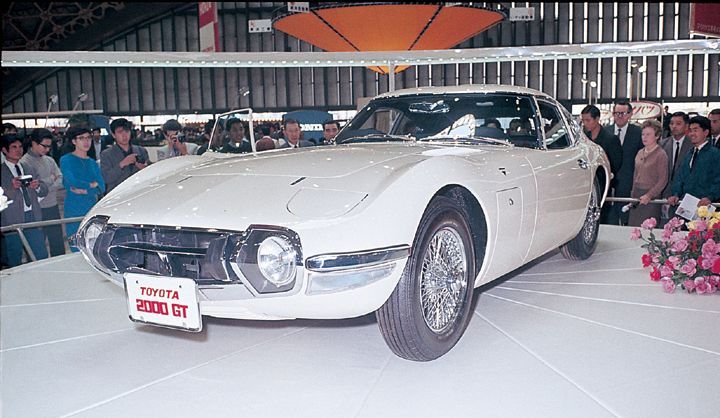 The prototype 2000GT making its debut at the 1965 Tokyo Motor Show.
Toyota

Well, that’s Toyota’s narrative. Yamaha allegedly began work on what became the 2000GT on its own, initially working with Nissan on a car codenamed the A550X, according to Datsun Fairlady Roadster to 280ZX: The Z-car Story. Nissan canceled the A550X, which led Yamaha to Toyota, though it’s unclear precisely what happened next.

Toyota scrapped Yamaha’s development work on the A550X in favor of development work it had already undertaken, according to Hemmings, though many have noted the similarities between the A550X prototype and the 2000GT. While visually, the 2000GT is similar to the A550X, it also draws much from the Sports 800. 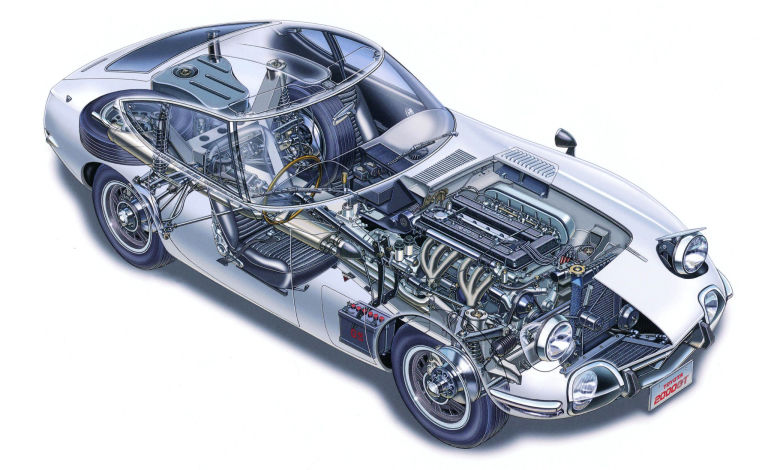 In any case, Toyota played a huge role in the 2000GT’s development. Its shape was designed by Toyota’s Satoru Nozaki, who sought to create a smaller, more Japanese-styled version of the Jaguar E-Type. Yamaha and Toyota engineers had their sights set on the E-Type as well, mainly it’s legendary XK straight-six.

Yamaha took the 2.0-liter SOHC straight-six from the Toyota Crown sedan and designed a new aluminum DOHC head, which produced around 150-hp. The Jaguar engine was known for its reliability in competition, so Toyota famously subjected a 2000GT prototype to the Yatabe Speed Trial in 1966. At the 72-hour event, the 2000GT averaged a speed of 128.76 mph around a banked oval. The 2000GT straight-six, dubbed the 3M, had proven its worth.

While the engine and shape owe their existence to the E-Type, the 2000GT’s construction drew inspiration from the ultra lightweight Lotus Elan, which had a fiberglass body on a steel backbone chassis. The E-Type, by contrast, used a unibody construction.

The 2000GT’s aluminium body was hand made by Yamaha and it featured four-wheel independent suspension, a limited-slip differential and magnesium wheels, all firsts for a Japanese car. Four-wheel disc brakes also came standard. Yamaha also lent some of its piano making skills in the interior, which featured a gorgeous wood dash.

I’ve never driven one of the 351 2000GTs built, but by most accounts, they’re excellent to drive. 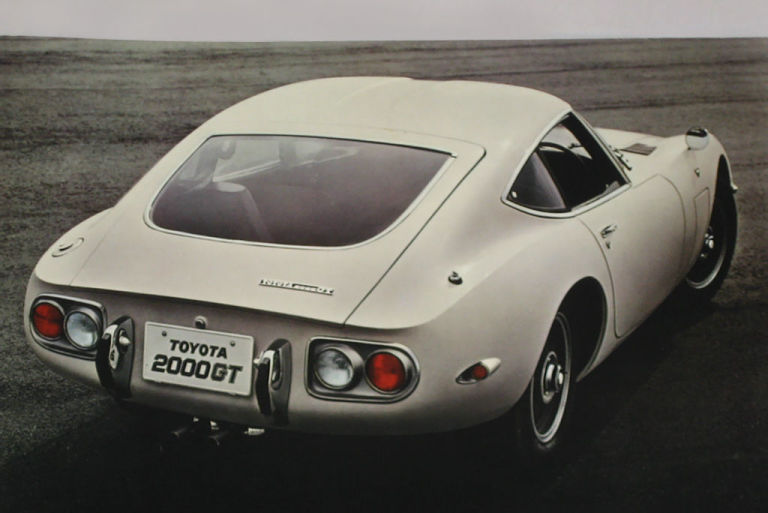 UK publication Classic & Sports Car said the 2000GT was the “only one [that] feels like a sports car” in a modern comparison test with a Corvette Sting Ray and Jaguar E-Type.

When the 2000GT reached production in 1967, it proved once and for all that Toyota was a world-class automaker and that the rest of the world should take the Japanese auto industry seriously. The 2000GT was somewhat misunderstood in its time, though.

Toyota originally planned to make 1000 per month, according to Hemmings, but only 351 were produced in four years of production. A handful of 2000GTs were officially imported to the United States, but a list price of $7230 in 1968 made it more expensive than the Corvette, E-Type and Porsche 911, according to Automobile. Considering it was slower than it’s rivals and, let’s face it, Japanese, the 2000GT was never poised to set the U.S. market on fire in its day.

It did serve as a preview of how the Japanese auto industry would come to dominate in the 1970s and especially the 1980s. It was a warning sign that was largely ignored, though

While Toyota continued to make sporty cars, it never really created a high-performance follow-up for the 2000GT, instead focusing on the staid, reliable sedans it’s now known for. Nissan, hilariously enough, produced what is arguably the closest follow-up to the 2000GT, the 240Z, a lightweight, straight-six powered sports car, styled after the Jaguar E-Type.

Now that Scion is dead, our Jack Baruth called on Toyota to return to its performance roots. If Toyota decides to do so, Toyota would be wise to rekindle the moonshot spirit that led to the 2000GT. 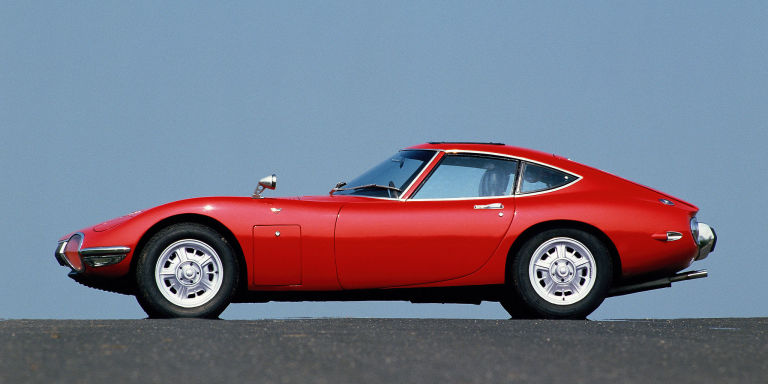